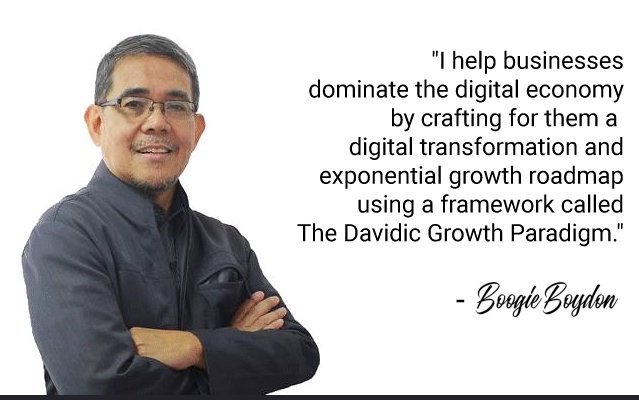 Boogie has over thirty (30) years of experience in the Computer and Information Technology industry. Among the executive positions that he has held in industry are as Projects Director for Dataflow, Inc.; as General Manager of EDINet Philippines of the Ayala Group of Companies;

In 2013, Mr. Boydon became the recipient of the Esther A. Vibal award for Education Technology and Innovation, the first ever in this category, given by the Philippine Association for the Advancement of Science (PhilAAS). PhilAAS, which was established in 1951, is a non-profit private national organization that aims to promote and broaden the base of scientific advancement in the country. He was recognized for his work on elearning systems. The award was featured in two newspaper articles, the Philippine Star online versions may be found at:

Filipino Scientists Cited
while an offline version was published in the Sunday, September 8, 2013 issue of Business Mirror.
It was also written about here --> Science Group Gives Awards to Four Outstanding S&T Contributions
Boogie has built his expertise on learning management systems and is a consultant on and developer of online learning community portals.

For the last seven years, Mr. Boydon has built his expertise on the Joomla! content management system, portal engine, and website development platform. He has created and developed more than a hundred Joomla-based websites and offers an online course on the Joomla CMS (http://boogieboydon.com/index.php/enroll-in-online-joomla-course ).