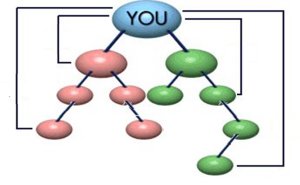 I recently joined a network marketing (also called multi-level marketing or MLM) company and have been asking people about the business model to get their perception about it. One of the questions I'm asked in return is if this is the same as a pyramiding scheme. Although not too many ask this question, I find this a significant one and thus have chosen to write about it.

Indeed, this question is triggered by the bad impression that some people have but no, legitimate MLM companies are not pyramid schemes. The bad side of it of course is that the MLM business model has been abused by some and turned into pyramid schemes were the distribution of products is overtaken by pure money objectives.

MLM is actually a variant of direct selling. Ideally, it's a noble alternative to traditional distribution because in the traditional model, only the manufacturer, say Coca Cola, gets the profits and keeps getting richer. In MLM, the proceeds of sales of products gets to be distributed among the participants. Avon and Tupperware are examples of direct selling companies, while Amway and NuSkin are two popular MLM companies.

In the traditional business model, a manufacturer, say a drug company, develops a drug and distributes it to the public. They go through intermediators like distributors, wholesalers, and retailers. The end user gets to buy it but in this traditional chain of commerce, he is not a participant in the proceeds of the business. Since one of the goals of business is to make money, this model does make money and in some cases, lots of money. The intermediators make money, and the manufacturer gets richer and richer. But never, in the scheme of things of this traditional business model does the end user get a piece of the pie. Except, of course, for the product that they bought and used.

But what if let us say, an end user buys the product, and because he likes it so much, goes around telling his friends about it and convincing them to try it out themselves. He is literally promoting the product and helping the manufacturer realize more sales. This is where the network marketers now are harping on the deficiency of the traditional business model. In the process of promoting the product to friends and other people, an end user becomes an active participant in the marketing of the product. Unfortunately, he gets nothing out of his effort but the satisfaction of seeing others enjoy the same product that he is enjoying. You can get hoarse in the throat convincing friends how good Kimmy Dora 2 is and prodding them to watch it themselves but never in your wildest dreams would Piolo Pascual share his earnings with you.

Of course, considering the analogy presented in the previous two paragraphs, it is clear that one importat aspect of network or multi-level marketing is that the marketer is an active user and believer of the product he is marketing first and foremost. Personally, I will not join an MLM company where the product is something I do not use nor believe in.

It is also not true that MLM drives prices of products up. Ever since our society has shifted to the use of paper money (and coins) to pay for things that we buy, price has always been a subjective matter based on perceived value. For a long time we've always paid for high-priced drugs from the big pharmas and we've never really complained. We may think that supplements from MLM companies may be overpriced but other people would not think twice about paying 135 pesos for a cup of coffe at Starbucks. It's is not really true that the price of products go high just so shares among levels are ensured. Even regular products in traditional business models may be perceived this way if that is the point. A typical product would only cost so much to be produced. But before they get to the consumer, marketing budgets spent on advertisements and other promotions would jack the price up several hundredfold. And yet we don't complain about it.

The traditional business model that is driven by capitalistic principles is fast becoming outmoded. Network or multi-level marketing is a far better scheme than the traditional one where capitalists get richer and richer while the bulk of those who participate in the business barely make out a living. It is a far better deal than an airline company where flight attendants risk their lives to give service to the company's customers (which by the way is a form of marketing since good service keeps customers coming back and telling others about it) but have nothing to show for it at the end of the day while the business empire builder gets to be named one of the richest businessmen alive.

So before you summarily dismiss the next guy that comes around telling you about network or multi-level marketing, think about the points I raised here and give it one more serious look.