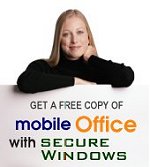 Hurry! Download your free copy of the pictures below entitled "Mobile Office with Secure Windows". Just right-click on the images and choose "Save link as ..." or "Save image as ..." then save the picture to your local drive.

Feel free to forward this to your friends (and even your enemies if you have some favorite ones). Just click [ here ] or on the "EMAIL" icon beside the title above and a window will pop up for you to forward the link to this page.

The insatiable quest for knowledge has always been man’s biggest driving force that propelled him from a primitive existence to a lifestyle characterized by convenience and advanced intelligence. And it has always been an inherent quality borne by man’s natural domination over his surrounding environment. Science is the formalization of this instinctive quest for knowledge. As noted scientist Albert Einstein puts it succinctly ”The whole of science is nothing more than a refinement of everyday thinking.”1 It presents what would otherwise seem to be mere accidental discoveries as a disciplined formulation of thought, hypothesis, investigation, analysis and conclusion. It performs “observation, identification, description, experimental investigation, and theoretical explanation of phenomena.”2